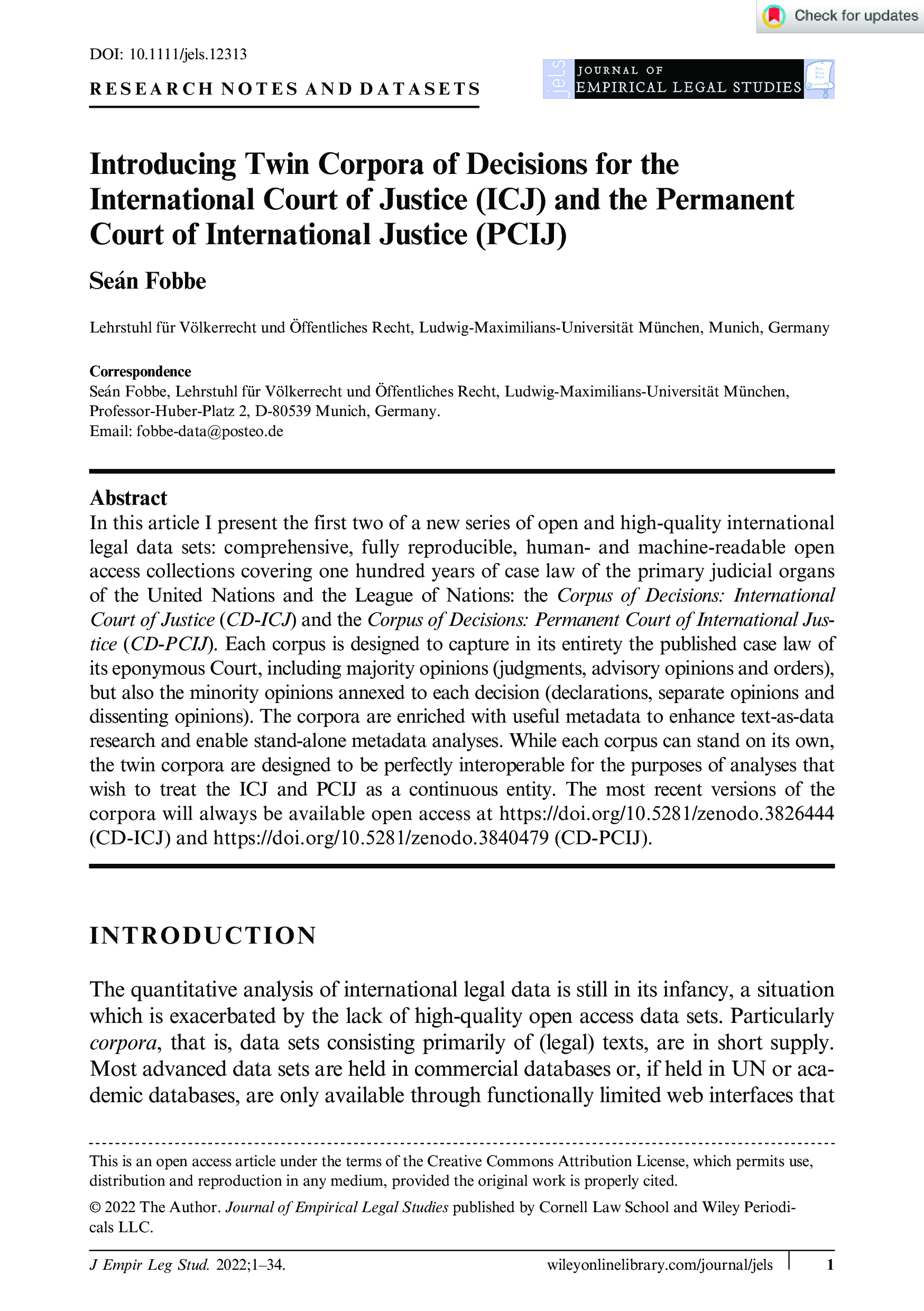 In this article I present the first two of a new series of open and high-quality international legal data sets: comprehensive, fully reproducible, human- and machine-readable open access collections covering one hundred years of case law of the primary judicial organs of the United Nations and the League of Nations: the Corpus of Decisions: International Court of Justice (CD-ICJ) and the Corpus of Decisions: Permanent Court of International Justice (CD-PCIJ).

Each corpus is designed to capture in its entirety the published case law of its eponymous Court, including majority opinions (judgments, advisory opinions and orders), but also the minority opinions annexed to each decision (declarations, separate opinions and dissenting opinions). The corpora are enriched with useful metadata to enhance text-as-data research and enable stand-alone metadata analyses. While each corpus can stand on its own, the twin corpora are designed to be perfectly interoperable for the purposes of analyses that wish to treat the ICJ and PCIJ as a continuous entity.

Destroying the Soul of the Yazidis: Cultural Heritage Destruction during the Islamic State’s Genocide against the Yazidis (2019) 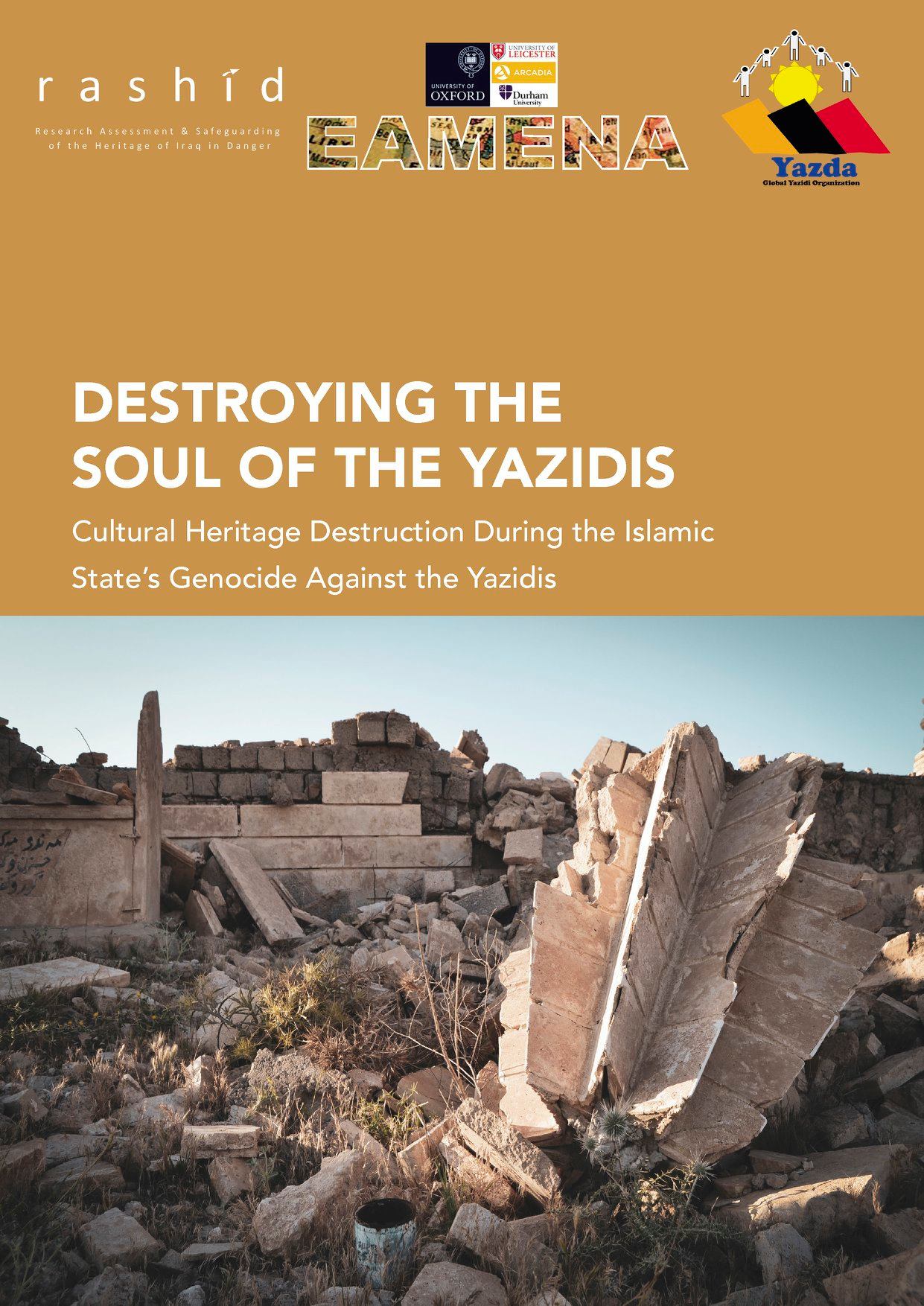 On 2 August 2019, the eve of the 5th anniversary of the attacks on Sinjar by the Islamic State (IS), RASHID International, Yazda and the Endangered Archaeology in the Middle East and North Africa Project (EAMENA) released the results of their investigation into cultural heritage destruction during the genocide against the Yazidis, in a report entitled ‘Destroying the Soul of the Yazidis: Cultural Heritage Destruction during the Islamic State’s Genocide against the Yazidis’.

Out of the total of 68 sites reported destroyed we consider 16 sites in the Bahzani/Bashiqa area and 8 in the Sinjar area to which access was possible and which could be documented.

Discussions of the genocide committed against the Yazidi people by IS from 2014 onwards have generally focused on murder, slavery and sexual exploitation. In this report we analyze the destruction of Yazidi tangible and intangible cultural heritage as a significant facet of the Islamic State’s policy of ethnic cleansing and genocide. Evidence of destruction is collected and presented in context with other criminal acts.

A revised and updated version of the report was published as a peer-reviewed paper in the Asian Yearbook of Human Rights and Humanitarian Law (AYHL). The AYHL is edited by Professor Javaid Rehman, the United Nations Special Rapporteur on the human rights situation in the Islamic Republic of Iran.

Heritage and Cultural Healing: Iraq in a post-Daesh Era (2020) 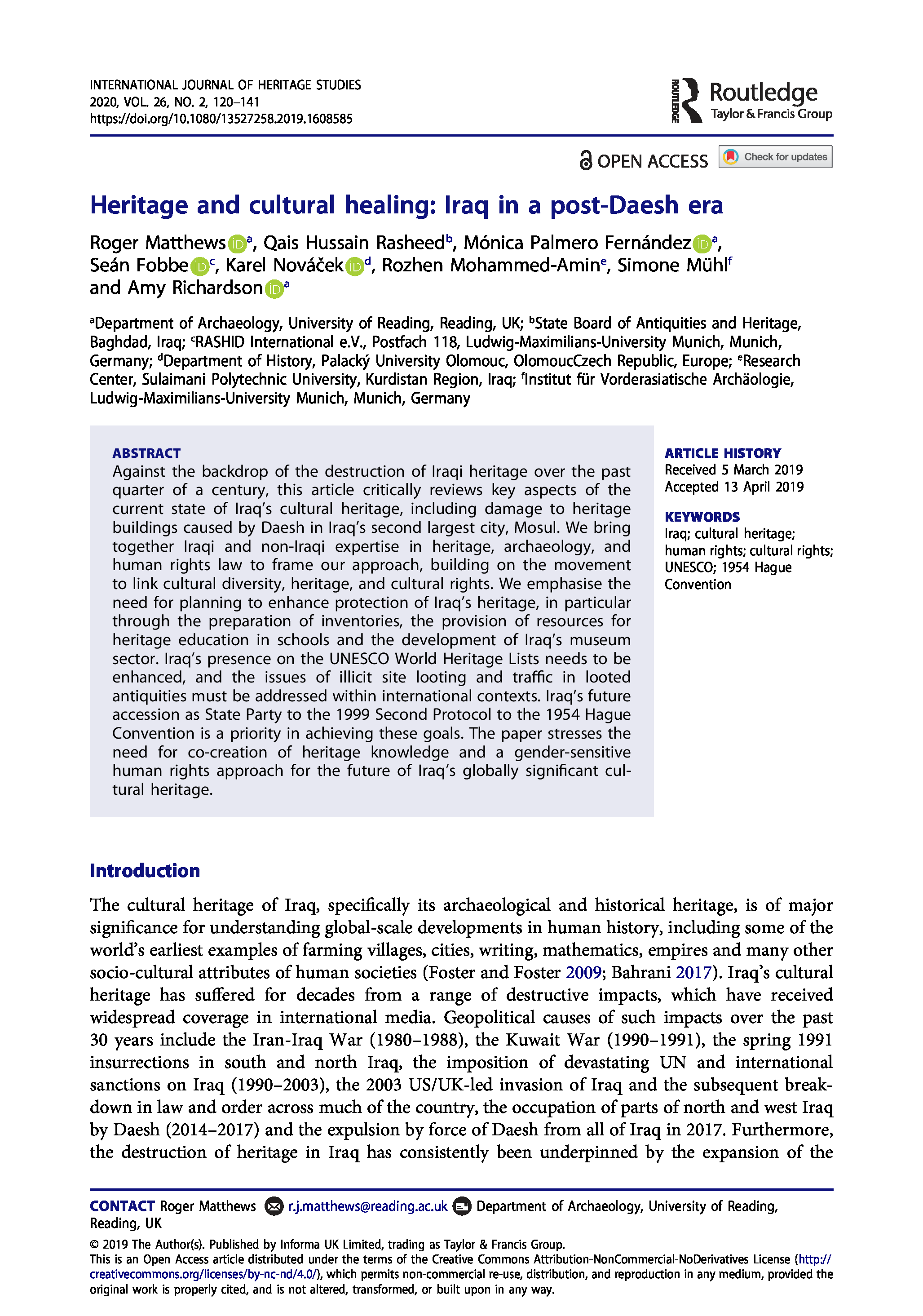 Against the backdrop of the destruction of Iraqi heritage over the past quarter of a century, this article critically reviews key aspects of the current state of Iraq’s cultural heritage, including damage to heritage buildings caused by Daesh in Iraq’s second largest city, Mosul.

We bring together Iraqi and non-Iraqi expertise in heritage, archaeology, and human rights law to frame our approach, building on the movement to link cultural diversity, heritage, and cultural rights. We emphasise the need for planning to enhance protection of Iraq’s heritage, in particular through the preparation of inventories, the provision of resources for heritage education in schools and the development of Iraq’s museum sector. Iraq’s presence on the UNESCO World Heritage Lists needs to be enhanced, and the issues of illicit site looting and traffic in looted antiquities must be addressed within international contexts.

Iraq’s future accession as State Party to the 1999 Second Protocol to the 1954 Hague Convention is a priority in achieving these goals. The paper stresses the need for co-creation of heritage knowledge and a gender-sensitive human rights approach for the future of Iraq’s globally significant cultural heritage. 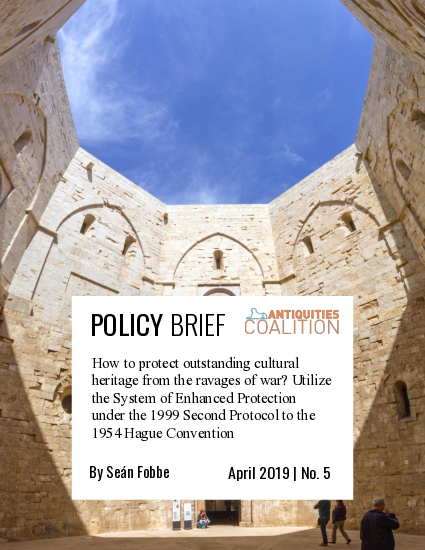 Cultural heritage around the world continues to be threatened by war. The 1954 Convention for the Protection of Cultural Property in the Event of Armed Conflict (‘1954 Hague Convention’) automatically confers protected status on every cultural property “of great importance to the cultural heritage of every people.” This very universality, however, is also its greatest weakness: it does not provide visibility to individual cultural sites or help military planners and field commanders choose priorities.

In addition, the system of Special Protection under the 1954 Hague Convention is in a state of relative dormancy due to its requirement that sites be located an adequate distance from military objectives, and because of the politicization of the inscription process during the Angkor debacle of the 1970s. World Heritage status functions as a stop-gap measure for some sites, but is financially infeasible for most States and, in any case, provides no additional legal protection.

Info
[Open Access] How to protect outstanding cultural heritage from the ravages of war? Utilize the System of Enhanced Protection under the 1999 Second Protocol to the 1954 Hague Convention (Antiquties Coalition Think Tank 2019)

On 23 March 2021 the Office of the Prosecutor (OTP) of the International Criminal Court (ICC) published a Draft Policy on Cultural Heritage dated 22 March 2021. Following its publication the OTP opened a round of external consultations and requested that comments on the policy be submitted by 16 April 2021.

We find the Draft Policy on Cultural Heritage to be, in general, an excellent document, both well-crafted in a technical legal sense and detailing a strong and reasonable strategy to prosecute crimes against cultural heritage.

In Section 2 we highlight several positive aspects of the Draft Policy on Cultural Heritage. The OTP’s cooperation with civil society, as expressed through an expert consultation in 2017, the ability to comment on the Draft Policy in the present external consultation and the strategic mention of civil society are most welcome. The explicit link between cultural heritage and human rights will be a boon to the OTP and analysts of international criminal law.

We commend that the OTP acknowledges that groups and the international community can be victims of crimes against cultural heritage. One of the Draft Policy’s greatest strengths is its holistic definition of cultural heritage, which transcends the traditional focus on physical property and is better able to capture the complexity of culture. We note with appreciation the OTP’s intent to consider the ‘broadest scope of criminality’ and its willingness to conduct a cultural analysis of all of the Rome Statute’s provisions. We support the OTP’s interpretation that war crimes do not include a ‘great importance’ criterion. We strongly encourage the OTP’s consideration of crimes against cultural heritage as possible evidence of the special intent to commit genocide.

In Section 3 we discuss several issues that we feel require further attention by the OTP. We greatly appreciate the OTP’s efforts to add linked citations to open access materials and recommend that it consider citing scholarship with Digital Object Identifiers (DOI). The ‘fundamental rights’ basis of the crime of persecution should be understood to include all human rights, if grave violations have occurred, in line with the jurisprudence of the ICTY.

We provide some additional context on heritage crimes and recommend that the OTP also investigate the illicit trade in antiquities, either as an accessory form of pillage or as a crime against humanity in its own right, with the Islamic State as an example. To assist in this effort we discuss the application of forensic traceable liquids. We further recommend consideration of jurisdiction based on the active personality principle to prosecute transnational actors. The listing system of the 1954 Hague Convention and its Protocols may prove useful in analyzing aggravating factors and command responsibility. The indictment practice of the ICTY is collected and presented for use by the OTP.

Based on Sections 2 and 3 we provide a number of recommendations in Section 4 and conclude with ideas for further reading in Section 5.